Check out any 50th Anniversary reunion staged by any high school in the USA and you’ll find very few of those gatherings will have the luxury of live music. Of the small number that do, even fewer can brag that not one, but two of their classmates are in the band. We’ll have that awesome distinction when Aiken ’71 grads Ray Rissel and Kermit Kinne join their bandmates in Like Minds to rock our party on Nov. 6.

The quintet bills itself as a group of “seasoned players performing original tunes, covers, instrumentals and vocals,” delivering a repertoire of adult-pleasing tunes that range from jazz and pop to rock and blues. Before the pandemic ground live music to a halt, the band played regularly at the York Street Cafe in Newport, along with special gigs like the Mt. Healthy Summer Music Series, the ATP W&S Open, and fundraisers for ProKids and Envision scholarships 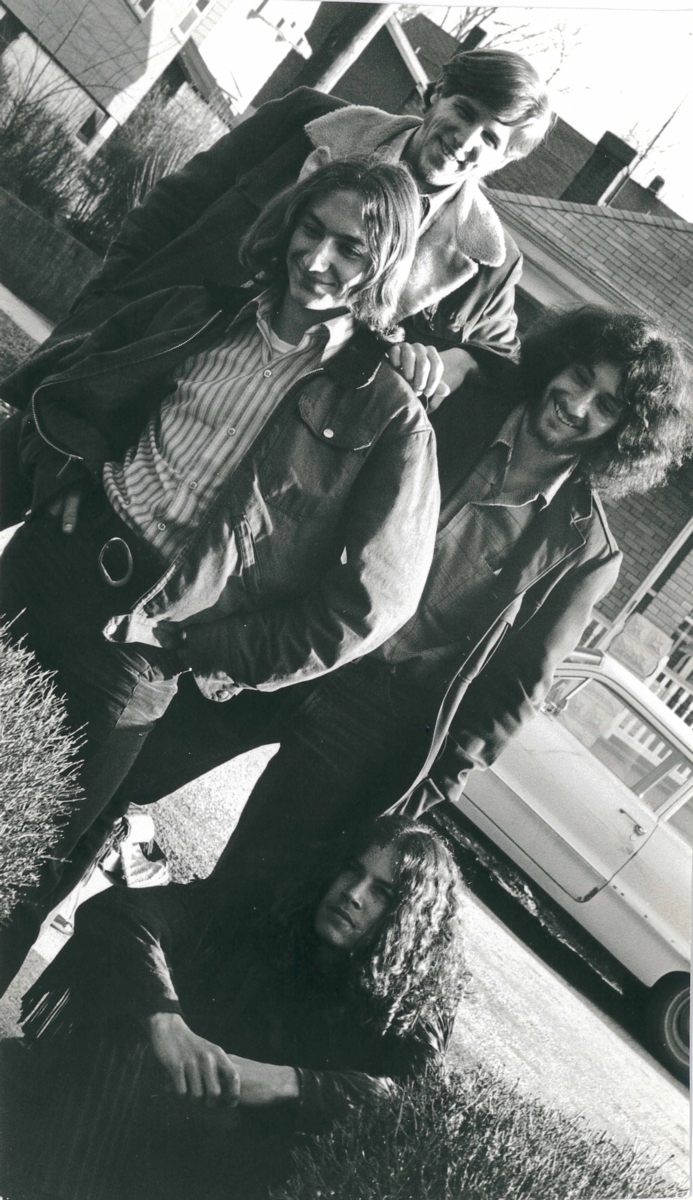 Four of five members of Aiken ‘71-era band Shadowfax, a predecessor of the group we’ll hear at our reunion. From left: Bill Moore, Roy Stanton, Kermit Kinne and Dave Freeman. This was decades before the advent of selfies, so fifth member Ray Rissel is the one who took the photo.

Like Minds’ roots actually date back to our high school years, when guitarist Ray and best friend Bill Moore, another ’71 Falcon, needed a drummer for a band he was putting together. That’s where Kermit came into the picture, followed by another ’71 classmate, Roy Stanton (tenor sax) and Class of ‘72’s Dave Freeman (alto sax). The band eventually went by the name Shadowfax, no relation to the contemporary jazz band of the same name that later recorded for Windham Hill and Capitol.

Shadowfax would sometimes accompany singers, but played their own gigs, too, including three times at Aiken: once in a talent show, next as the opening act for the U.C. Jazz Band in our auditorium, and later on the patio as part of Aiken’s Arts Fair. 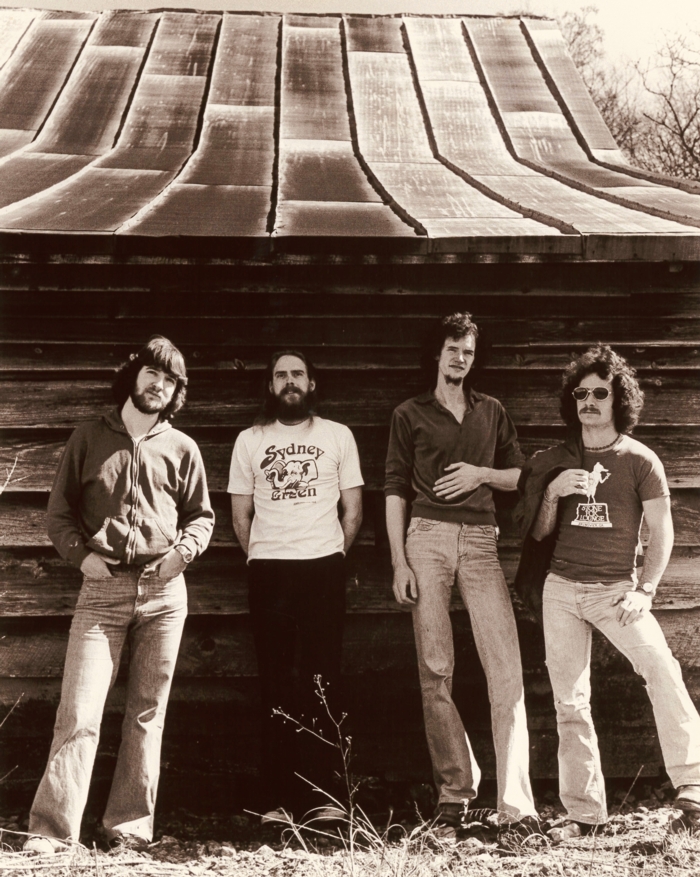 Whiskey Creek Band was one of the ensembles that kept Ray and Kermit busy after high school. From left: Pete Kinne,  Chuck Benderman, Ray and Kermit.

After high school, Bill unplugged his bass and enlisted in the Army, earning a Purple Heart before his medical discharge, but Ray and Kermit kept making music. “Kermit and I put a pretty good band together called Cityfryed,” says Ray. Kermit points out that U.C. pal and guitarist Barry Sebastian, the founder of Like Minds, was a member of that earlier band.

After Cityfryed called it a wrap, Ray recalls that he and his drummer pal “wound up playing in a road band called Whiskey Creek Band, with Kermit’s brother, Pete.” Whiskey Creek played a lot in the South, including markets in Florida, Alabama and Mississippi, and were particularly popular in Johnson City, Tenn. and Warner-Robins, Ga, where they landed regular house gigs, a pleasant reprieve from the tour grind.

Whiskey Creek eventually ran dry, which led Kermit to put his degree to work at a “real job” with Procter & Gamble, but Ray “continued to play in a couple bands on the road with great, talented musicians and singers whose names are long gone, just like the venues we played.”

Among those highlights was a band called the Driving Winds, which included two members of the Casinos, the group who had a national hit that was big on WSAI, called “Then You Can Tell Me Goodbye.” In fact, Ray says there were a few dates when Driving Winds actually billed themselves as the Casinos: two WGRR Oldies Fests, and another time warming up the Four Seasons at Taft Auditorium.

When it came time for Ray to find a more regular paycheck, he didn’t have to leave music right away, working at Buddy Rogers Music for 15 years before transitioning to a gig with the city of Mt. Healthy.

Sadly, Bill, the buddy who first put Ray and Kermit together, was felled by a long struggle with throat cancer at a way-too-young 57 in 2010. “It was a huge loss for many of us who knew him and witnessed his struggles,” Ray recalls. “Bill was a brother to me.” Don’t be surprised if Ray and Kermit dedicate a song to Bill when they join Barry and fellow Like Minds members Rene Peters (vocals, trumpet and percussion) and Jeff Keller (vocals and bass) at our 50th Anniversary Reunion. 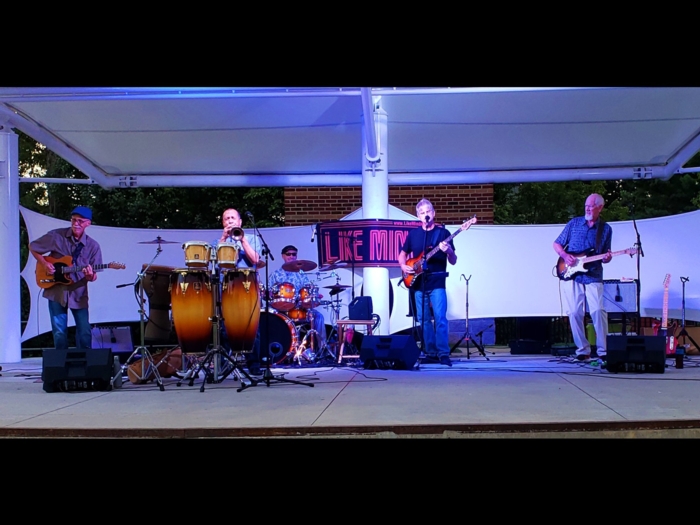 Like Minds is the band who will entertain us at our 50th Anniversary Reunion. From left: Barry Sebastian, Rene Peters, Kermit Kinne, Jeff Keller, and Ray Rissel.

As fun as it will be to see our classmates play on Nov. 6, that’s not the only great music we have lined up for you. Every Aiken grad who buys a ticket to the reunion gets to pick a song from our high school years for a Spotify playlist that we’ll hear throughout the evening and which all of us can enjoy for many years after the event.

Thankfully, your classmates have good tastes in music. Already 50 songs deep with a run time of more than three hours, the playlist will span a treasure trove of great tunes from the likes of the Beatles, Rolling Stones, Marvin Gaye, Aretha Franklin, Elton John, the Doors, the Temptations and Eric Clapton, plus a few memorable hits by some lesser known artists. With doses of Top 40, rock, R&B and country, it will be a trip down Memory Lane for your ears.

With awesome music and a chance to spend time with friends you have known for more than half a century, the Aiken ’71 50th Anniversary Reunion is a night you won’t want to miss. Sure hope to see you there when we gather Nov. 6 at Centennial Barn in suburban Cincinnati!

THE LAST DAY to get tickets is this Thursday, October 21 and they will not be available at the door.   Tickets can be purchased on the TICKETS page of the reunion website, where you can pay by check (using mailing instructions provided at checkout) or by credit card. Check is preferred, by the way, since it saves us the processing fee. Cost is $60 per person, and includes old friends, live music, catered dinner and cash bar. If you have any trouble ordering, give website administrator Keith Brown a call at 513-602-5544 for friendly assistance!